Nora Houston (1883-1942) was a pioneering artist, art educator, and activist in Richmond, Va. She left an enduring legacy in Richmond through her art, teaching, and advocacy for voting rights, civil rights, women and children, and the poor. 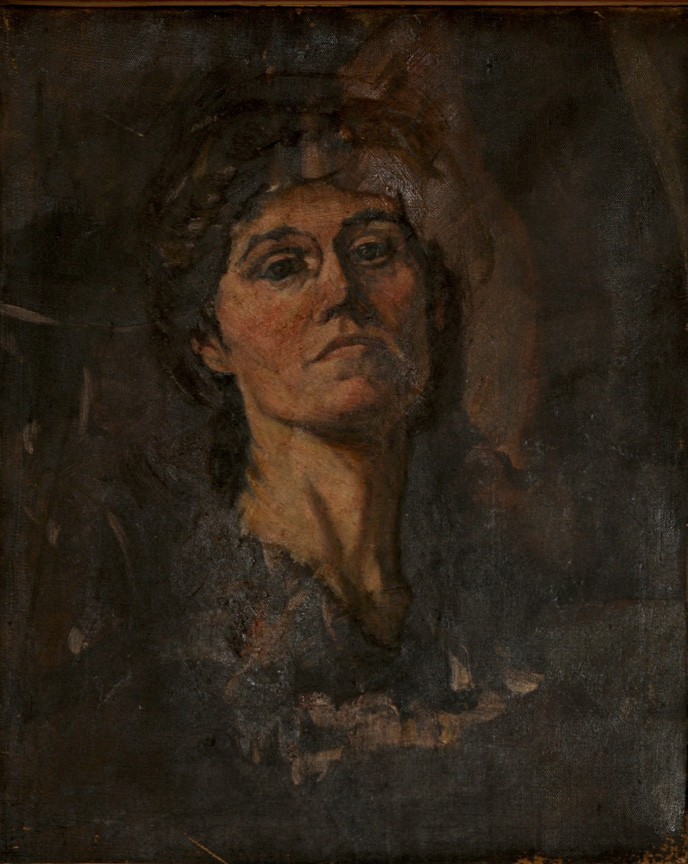 Houston was born in Richmond on June 24, 1883. She was the only child of Dr. Henry Houston, a prominent physician, and Josephine Dooley Houston. Growing up in Richmond, Houston was influenced by the social activism of her aunt, Alice Dooley, an active member of  St. Peter’s Catholic Church in Richmond who helped found the Social Service Federation; and the philanthropy of her uncle, James Dooley.

When she was ten years old, Houston began taking art lessons at the studio of her next-door neighbor Lilly Logan. There she met Adele Clark, also a student, who would become her lifelong friend. When they were teenagers, Houston and Clark joined the Richmond Art Club, where they studied with illustrator William Sheppard, sculptor Edward Valentine, and progressive artists Anne Fletcher and Hallie Taliaferro.

With Taliaferro’s encouragement, Houston and Clark applied for scholarships to study in New York with William Merritt Chase, renowned in the international art world in the late 19th and early 20th centuries as an innovative painter, “a brilliant observer of contemporary life,” and an influential and devoted teacher.  Houston attended Chase’s school from 1905 to 1908; while there, she also took classes from Robert Henri and Kenneth Hayes Miller.  During this time, she painted Meditating Armenian, Armenian Woman, and Armenian Woman in Meditation.

Houston returned to Richmond in the summer of 1907, set up a studio, and began taking commissions. She painted Self-Portrait  and portraits of her mother, Josephine Dooley Houston, and her friend John Powell, a pianist who had studied in Vienna. 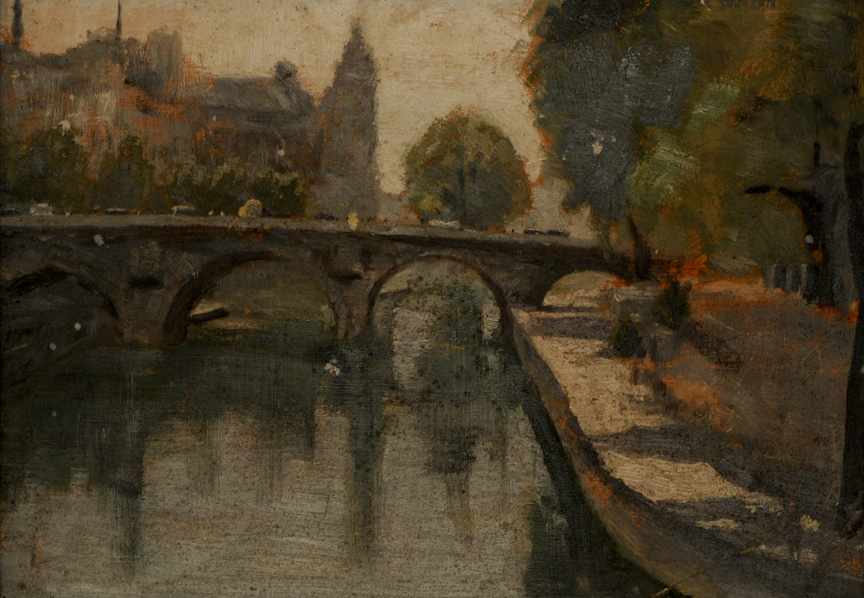 In February 1908, Houston traveled to Paris to enroll in the Academie Colarossi, where she was introduced to Cubism and Fauvism.

She returned to Richmond in 1909 and began teaching, with Adele Clark, at the Richmond Art Club. Their students included Theresa Pollak (1899-2002), instrumental in the founding of the VCU School of the Arts; and Edmund Archer (1904-1986), one of three founding curators at the Whitney Museum of American Art.

In 1916, Houston and Clark opened their own studio, Atelier, on Franklin Street. In 1928, they moved the studio to 3614 Chamberlayne Avenue in Richmond’s Ginter Park neighborhood.

In November 1909, Houston, Clark, Houston’s mother Josephine Houston and her aunt Alice Dooley attended the first meeting in Richmond of a group of women seeking the right to vote. The group evolved into the Equal Suffrage League of Virginia. Houston was a delegate to the league’s first convention in November 1911 and later served as secretary of the league.

In 1920, Houston and Clark canvassed Jackson Ward and personally assisted hundreds of African Americans with registering to vote; they also invited African American community leaders to their studio for get-out-the-vote strategy sessions.  In the 1920s, Houston chaired the Richmond Commission on Interracial Cooperation. Under her leadership, the commission established goals of improving housing and creating libraries and schools for African Americans and issued documents condemning the Klan, lynching, and sexual exploitation of black women.  Houston’s connections with the black community in Richmond enabled her to get permission to paint one of her signature works, Suffer the Little Children to Come Unto Me, a depiction of First Holy Communion at St. Joseph’s Catholic Church, then located in Jackson Ward.

Suffer the Little Children to Come unto Me

In the 1920s, Houston became interested in social welfare issues affecting children through her work with the Virginia League of Women Voters and the Children’s Code Commission, established by Governor Westmoreland Davis at the suggestion of the League of Women Voters.  Under Houston’s leadership, the Commission introduced and won passage of 20 bills focused on improving the juvenile justice system, strengthening child labor laws and children’s access to health care.

Houston was also actively involved with the Catholic Woman’s Club of Richmond, which she joined at the urging of the Most Rev. Denis J. O’Connell, the seventh Bishop of the Diocese of Richmond and her close friend and spiritual advisor.  Under her leadership (she served as president beginning in 1934), the club instituted study groups in art appreciation, social justice, and other civic issues, and focused on addressing the needs of homeless and neglected children, placing them in the care of St. Joseph’s Villa or with Catholic families.

In 1937, Houston was hired as Director of the Virginia Federal Art Project, a New Deal program to fund the visual arts. In this capacity, she painted a mural for the Rosa Bower Branch library in Jackson Ward, the first library open to African Americans in Richmond. 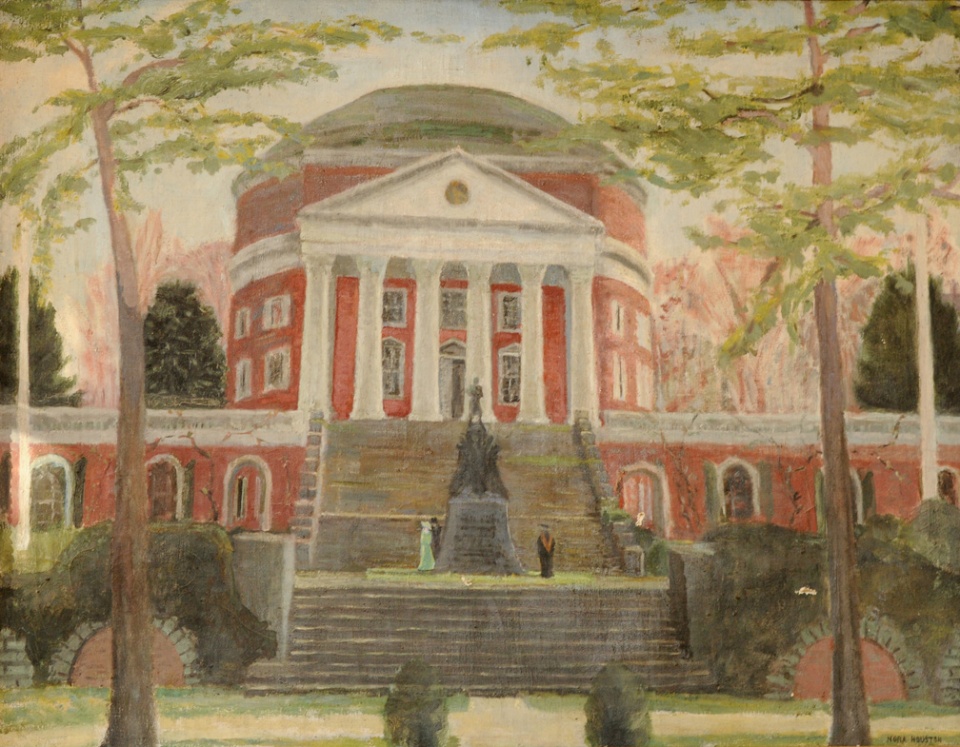 The Rotunda at the University of Virginia

Houston continued to paint during the 1920s and 1930s.  Her works from this period include Little Cottage in Limerick, Jubilate Deo, Omnis Terra (Sing Joyfully t o God, All Over the Earth); Laudate Dominum de Terra, Dracones ed Omnes Abyss (Praise Ye the Lord from the Earth, You Great Sea Creatures, and All Depths); and The Rotunda at the University of Virginia. She witnessed the last gathering of Confederate veterans in Richmond in 1932 and depicted the scene in The Last Parade of Confederate Veterans. During this period, she exhibited her work throughout Virginia, and in Chicago, Washington, D.C., and New York City.

Houston passed away from a sudden and unknown illness on February 20, 1942. Her funeral was held at St. Peter’s Catholic Church in Richmond, and she was laid to rest in the Houston family plot in Shockoe Hill Cemetery. Her grave is unmarked.

Houston’s paintings are part of the permanent collections of the Virginia Museum of Fine Arts, the Virginia Historical Society, the Morris Museum of Art in Augusta, Georgia; and the Johnson Collection in Spartanburg, South Carolina. The bulk of her work, however, was left in the custody of Adele Clark, her companion and lifelong friend. Hoping to find a home where Houston’s work could be preserved and displayed, Clark gave the paintings to St. Paul’s Catholic Church in Richmond in 1972. Clark passed away in 1983 at the age of 100. The church transferred ownership of the paintings to The Nora Houston Foundation, Inc., a Virginia non-profit corporation, in 2015.

The Library of Virginia selected Houston as one of its 2017 Virginia Women in History honorees. As part of the recognition, the Library produced a traveling exhibition and educational materials featuring the 2017 honorees, which was shared with libraries and schools throughout the state. During Women’s History Month, the eight selected women were honored at a public program at the Library of Virginia on Thursday, March 30, 2017.

Nora Houston is also on the Wall of Honor at the Virginia Women’s Monument, located in Capitol Square in Richmond.  See http://womensmonumentcom.virginia.gov/wallofhonornames.html.